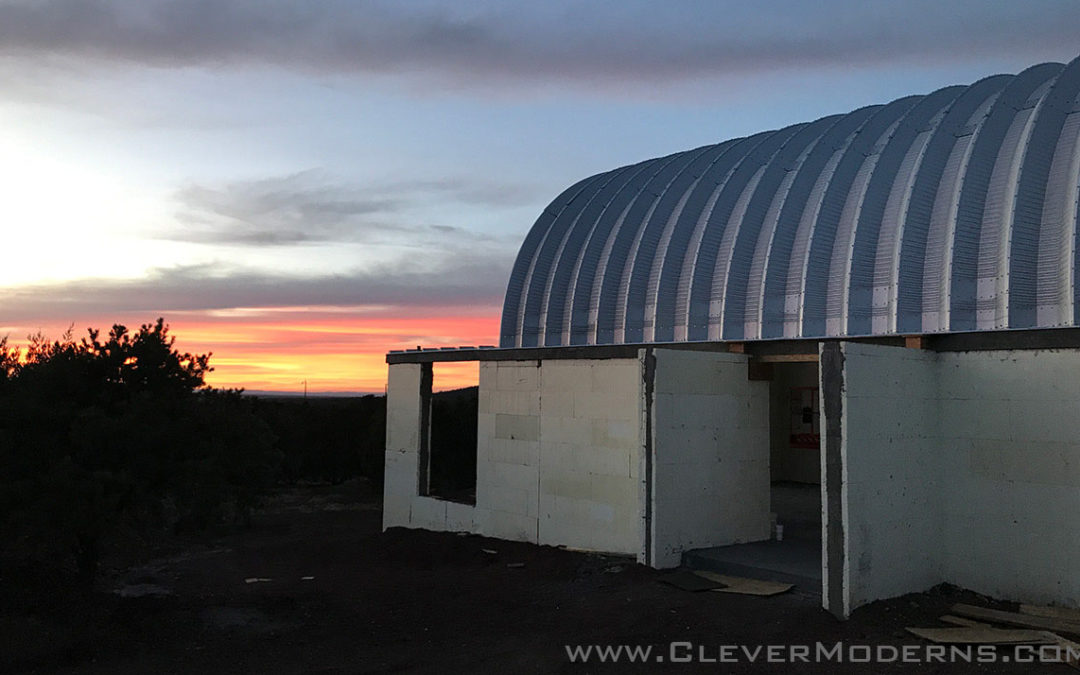 Design Evolution of our Loft House

Way back when we started dreaming up what would become the Quompound, it all started with an idea about a Quonset Hut House. As the designs and plans for the house grew and evolved, the Workshop and Headquarters Quonset huts were spun off from the house – it seemed best to start with those two simpler buildings first, to get our feet wet before tackling the actual house. Then the idea of the Quonset House itself evolved into a smaller Guest House which would be followed by a larger Main House. I blogged about the preliminary design for the Guest House back in May of 2017. (If you follow the link at the end of that blog post you can download that preliminary set of plans for free.)

By summer of 2017, after several months of road building, septic installing, electrical conduit trenching, and concrete pouring, we were ready to build the Workshop and Headquarters as our experimental first two huts. For two separate week-long camping trips, we had friends and family join us for what became known as Quonsetpalooza 1.0 and Quonsetpalooza 2.0.

We hoped to have our third hut, the Guest House (which we are now calling the Loft House), underway by early 2018. Our decision to pull up stakes and move from Los Angeles to Prescott, Arizona brought us physically much closer to the Quompound, but set back our construction schedule considerably. Finally, by the early fall of 2018, we were ready to erect the arches of the Loft House.

It was so exciting to finally be at the point of building the Quonset hut roof over the ICF concrete walls! These Quonset hut arch panels had been stacked and waiting on standby since the order arrived from SteelMaster way back in spring of 2017. We had ordered all three buildings at once, to get a better deal and save on shipping.

Since we had a team descending on the property to help, we wanted to do everything possible to get ready in advance. We’ve learned from past experience which things are more useful with a group and which things are better done before all the helpers arrive. For example, we went ahead and bolted down our base plates. This was a good task for Eric and me to do by ourselves. It took a whole day. We wanted to be able to fuss over it and take our time, making sure that they were all lined up perfectly. If the whole crew would have been there, it would have meant a lot of downtime for them.

We also ordered our scissor lift and had it delivered. This was our first time using one of these and it was awesome! It worked great to lift the panels high into place. Last year, we built our first two Quonsets without one, and for a 12′ tall arch we were able to manage fine. I would say about 15′ would be the maximum I would want to go using just scaffolding and muscle power. For anything taller than 15′ a scissor lift will make your life much, much easier.

The first few arches of your Quonset hut type building are always going to be the most challenging. The very first arch is really wobbly on its own, and you will need some kind of bracing to help hold it up until you get the next couple of arches in place. At that point the whole thing firms up and becomes self-supporting. We wanted to get those first few arches in place, or at least get the first one out of the way, before the crew showed up.

Also, we knew the first arch would have its own challenges just because of the end wall already being in place. On the one hand we figured the wall would potentially help support the first arch, but on the other hand, we also kind of expected it to be in the way. Because of the added head-scratching this was going to entail, we figured it was better to have the first arch or two in place, so that when we got our team assembled, we could try to just move forward as expeditiously as possible with the rest of the arches.

It was late afternoon by the time the scissor lift was delivered, offloaded from the trailer, and set up in the space. We worked into the early evening getting the first arch panels in place before the sun went down. Bolting that first panel in place was a real thrill!

The next morning we finished the first full arch and used a ratchet tie-down strap to tie it to the concrete wall for support.

After that it wasn’t long ’til we had the second arch underway, and our friends Glenn & Pam showed up. Glenn had helped us install our window boxes in the Headquarters the previous summer (read all about it, here) and it was really fun having them back at the Quompound. Here’s a video still from my timelapse camera with Glenn, Eric, and me lifting the last panel of the second arch into place:

Above you can see our basic setup: we had smaller sets of yellow scaffolding along the sides, with the larger three-tier scaffold and scissor lift in the center.

With Glenn’s help, we completed the third arch that day. By the next day though, our fourth team member Mark showed up. With two teams of two, the four of us got into a really good groove with the arches.

On our last morning, I shot a 360-degree panoramic image from on top of the scissor lift. I uploaded it in a separate post here – check it out!

The last couple of arches before we got to the end wall were pretty tricky. It turned out that the wall itself was somewhat in the way – much moreso than the first end wall had been. Also, because the slab was not yet poured for the area that will become the covered porch, it was impossible to run the scissor lift or the scaffolding on that area. This added to the difficulty of that last arch. We had to use a combination of the scissor lift underneath on the inside, and tall ladders on the outside of the wall. It was tricky but we got them.

Putting together these arches we went through nearly four buckets of bolts.

With our 19 arches completed, we still have to come back after the slab is poured for the covered porch, and build six more arches there. That may have to wait until spring. But, in the meantime, we will do what we can over the winter to get our doors and windows ordered, and start working towards getting the building enclosed.

We made a time lapse video of the whole process; check it out here!