Quonset Hut Side Windows Part I 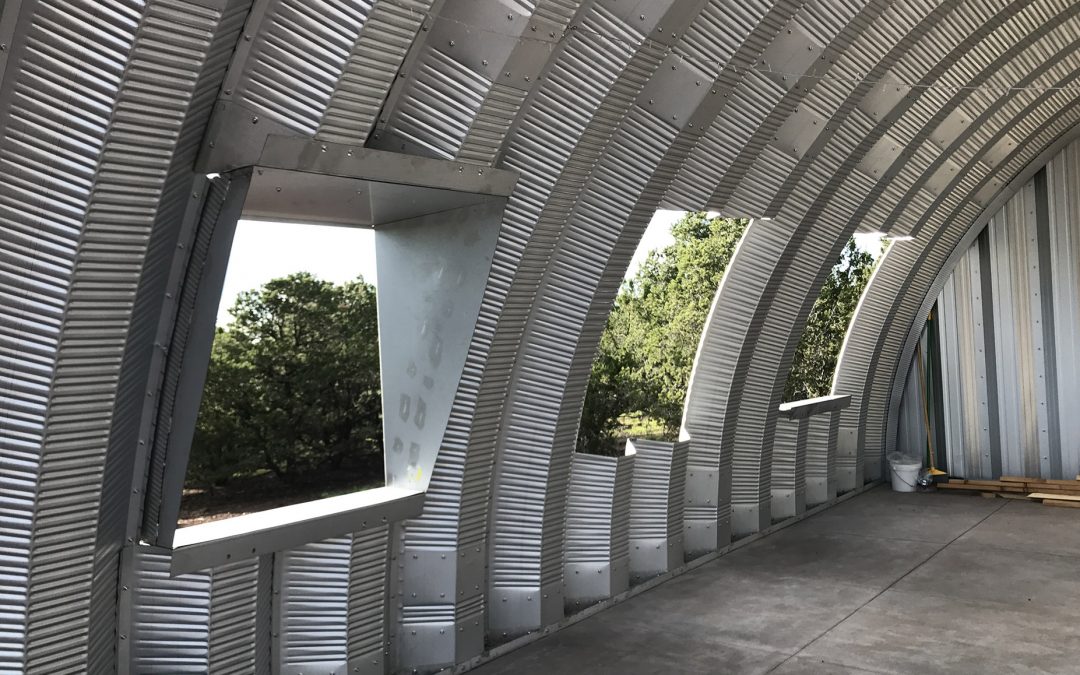 This post is mainly about getting the side windows installed in our Quonset hut, but there are some Other Really Great Things that happened on our most recent visit to the Quompound, as well! 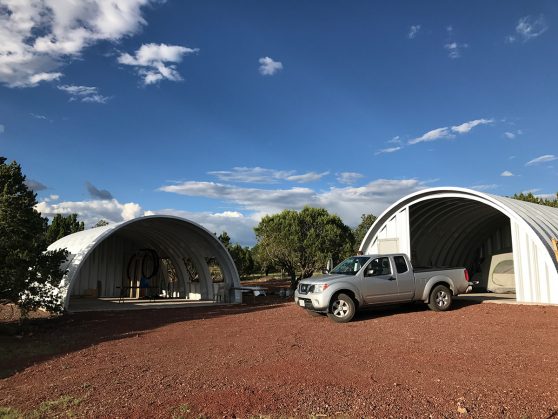 On our previous site visit we had installed our first of six side window boxes. Eric and I were really excited that we were able to install it all by ourselves, but we were also really glad that for the next big work session we had help. The window boxes are big and heavy; more bulky than heavy though. It’s much better if you can have at least two people lifting one, with a third person helping guide it into place. On this trip there were four of us, and it things went relatively smoothly. Glenn and Jay both found us through my Instagram feed, and expressed interest in helping out with the build. Somehow, everyone’s schedules aligned, and they both joined in; Jay drove up from the Phoenix area, and Glenn came from Southern California, by way of Las Vegas. It was great having them with us for a few days. This was the first of the Other Really Great Things from this trip: we made new friends!

The second Other Really Great Thing was the eclipse! The eclipse was the Monday of our week-long push, and we were prepared with eclipse glasses for the whole crew. The Quompound got about 70% coverage of the sun. It wasn’t as spectacular as 100% totality, but it was pretty cool. There were light clouds moving in and out as the moon passed in front of the sun. At times, the clouds provided the perfect amount of cover to see the sun really well. I took this photo close to the maximum, after which it clouded up very heavily and we didn’t really get to see much more. It was fun to pause our work from time to time and check on it. 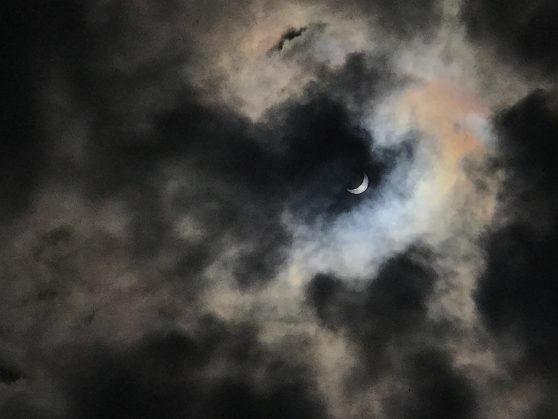 Also on Eclipse Day, the electricians came and hooked up our building panels to the main 400 amp meter box behind the Headquarters building. Now both buildings have electricity! Finally having electricity in the buildings was the third Other Really Great Thing. It’s not that exciting to photograph, but it’s an awesome milestone for the project. To not have to run all the extension cords from the meter panel to our work areas makes a huge difference. 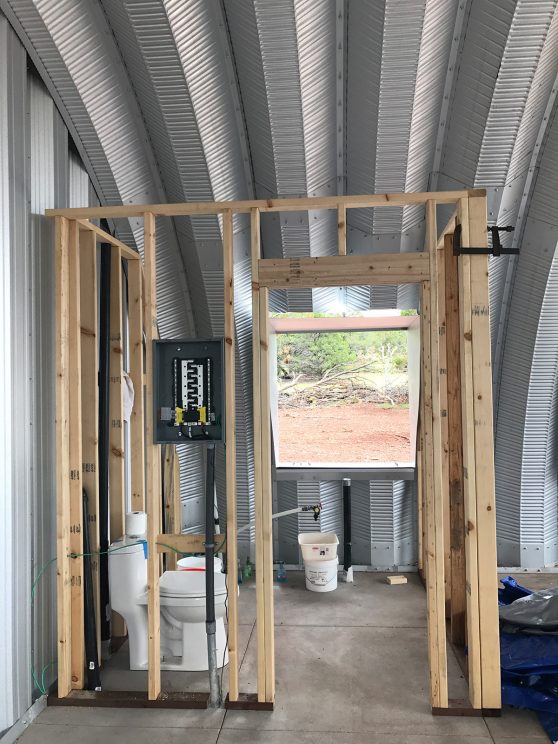 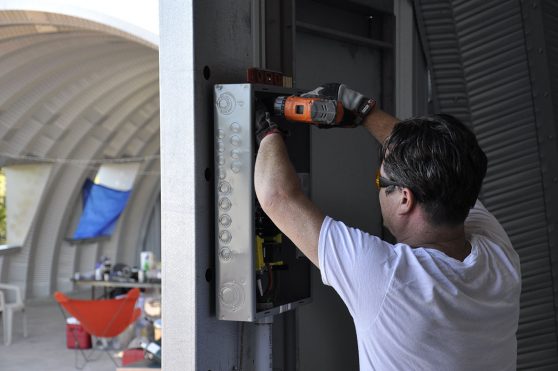 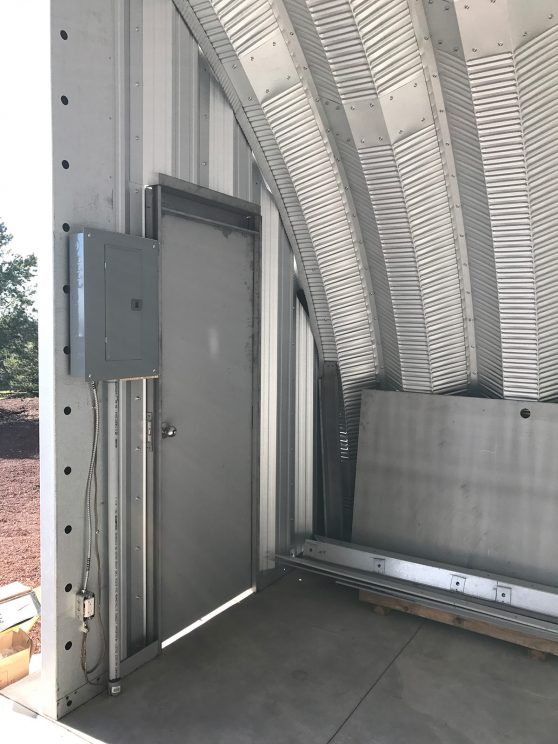 But the real story of this post is the side window boxes, so let’s get to that part of the story.

Each window box is really made up of three components. (Other manufacturers may vary. Ours came from SteelMaster USA and this is how they do theirs.) As shown below, the sill is on the right, the box in the middle, and what they call the canopy on the left. When we installed them, we first set the sill in the opening, placed the box on the sill, and then fit the canopy on top. The curved side flange on the box will get drilled to match the pattern of the bolt holes in the arches, and then you bolt them together. There is a lot of field drilling to put these together. I was very nervous that the field drilling would be harder than it turns out to be. It’s not that bad. 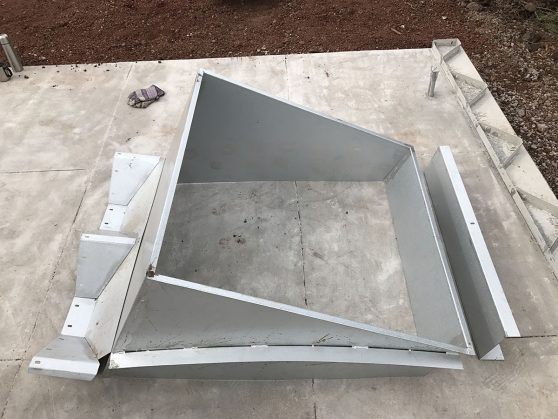 Below, Eric and Glenn work on bolting the box to the arch panel. Notice that the canopy hasn’t been set in place yet. 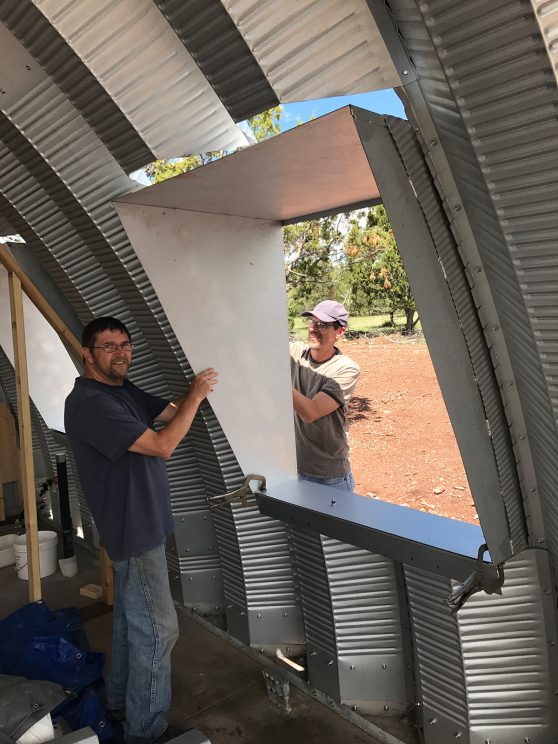 Here, Eric drills to bolt the canopy and box together, first inside and then outside. 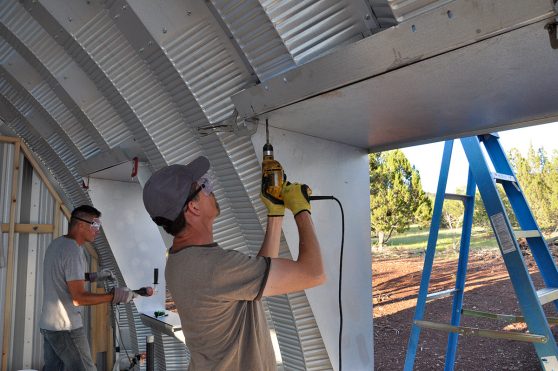 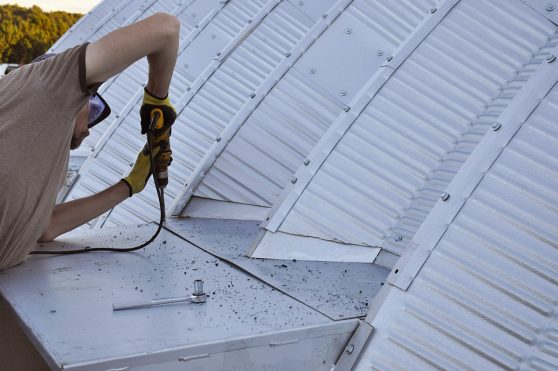 After installing the metal boxes into the side of the building, it is lined with 2×4’s, which are referred to as “bucking”, shown below. The sliding window unit will attach to the wood bucking. Bucking is more typically installed in a concrete block wall to attach a window, but the concept applies here with our metal building as well. 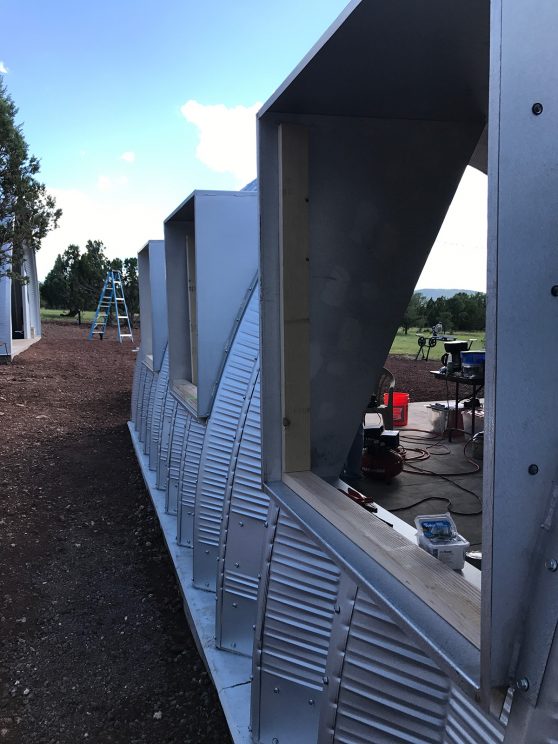 We ordered sliding windows because I liked the idea of the center vertical divider lining up with the visual rhythm of the building’s arches. 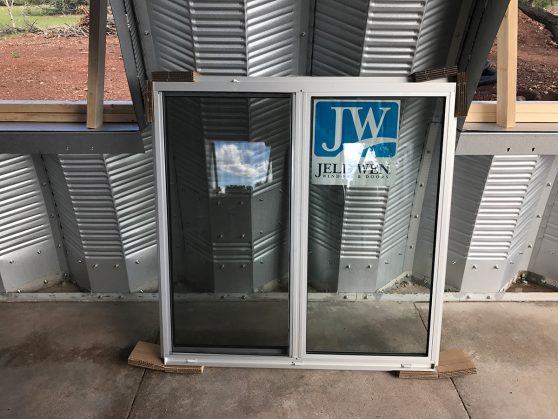 At this point, our process hit a snag, causing a learning experience. We had picked up this 3M flashing tape at Home Depot, thinking it would work great to seal up the wood/metal interface. First off, we had a lot of problems working with the tape. It was about 6″ wide and tenaciously sticky. It was so sticky that getting it to lay neatly into the corners was difficult, and especially so where the metal and wood came together in the inside corners. 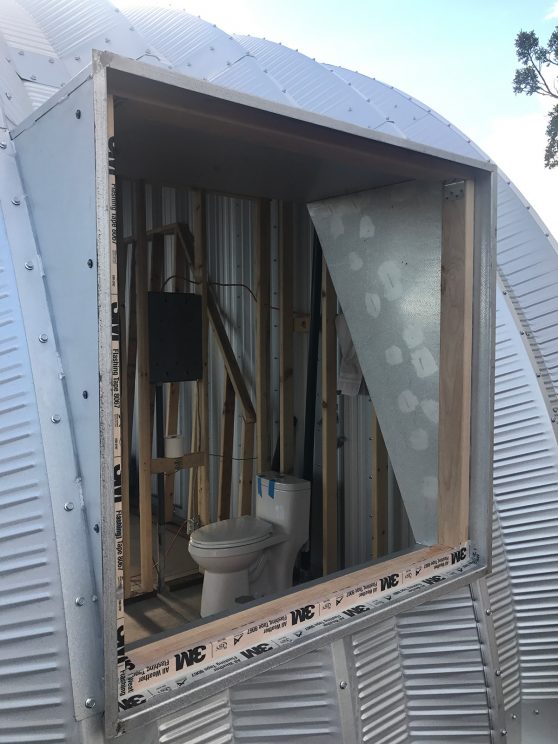 We had unknowingly made things worse for ourselves by attempting to seal the corners of the metal box with silicone. As it turns out, nothing sticks to silicone. Thus, the silicone made the bottom corners highly vulnerable to water intrusion, since the 3M tape wouldn’t stick to it. Below, you can see how easily I can pull back the 3M tape with my finger. It just pulls away effortlessly from the silicone in the corner. Incompatible sealants can be a big problem in construction, and I should have taken the time to look into this more carefully. The good news though, is that we caught the problem. 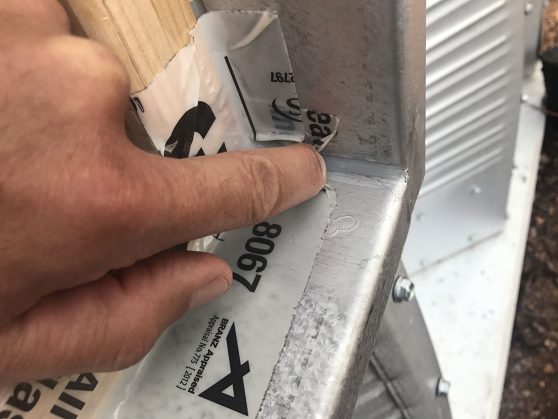 At that point we just decided we were done and it was time to pack up and head back to L.A. If the flashing had worked better, we were considering staying an extra day to get some or all of the windows installed. We were tired and frustrated though, and just didn’t have it in us to try and solve this.

But let’s end on a happy note: there’s one more Other Really Great Thing from this visit. With the window boxes all installed, our pile of building parts was reduced so much that we restacked the remaining parts in the Workshop, and cleared out the meadow! Check out the before & after – how it looked back in late March of this year when all our parts were first delivered, and now that it was all cleared out with the buildings standing. Quite a dramatic change! In the picture from March, you can see stakes in the ground where the buildings will go. 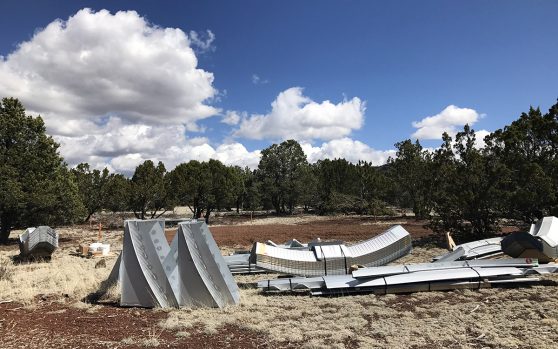 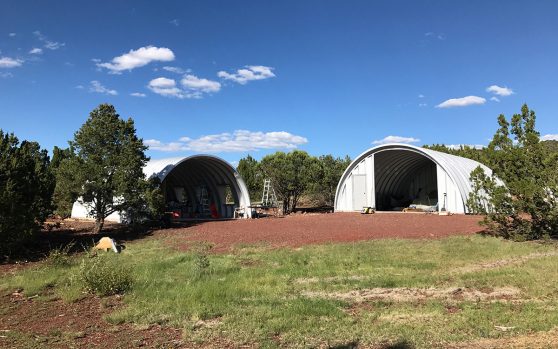 These are most of what was left: the roof system for our Guest House, which will be Building #3 at the Quompound. 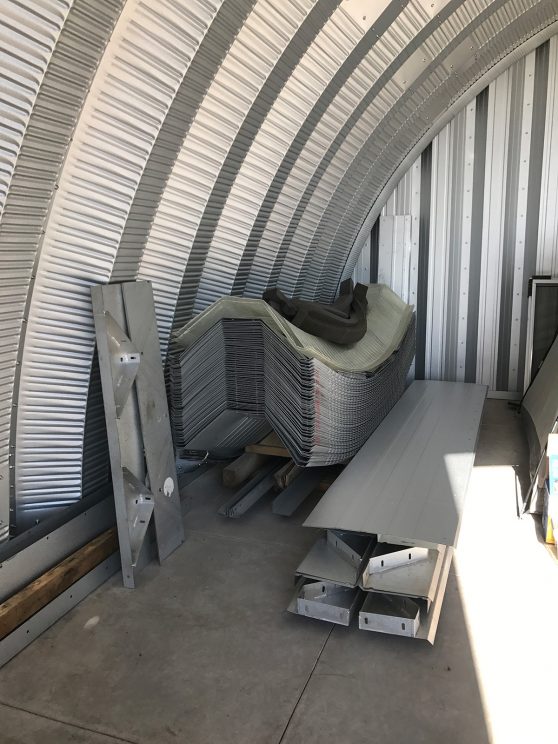 And now I’ll take us out with a nice star trail shot from this trip. Until next time… 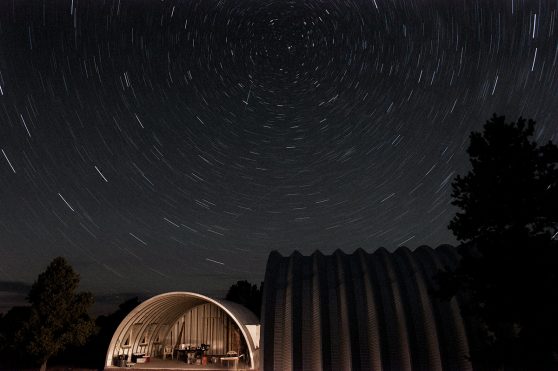