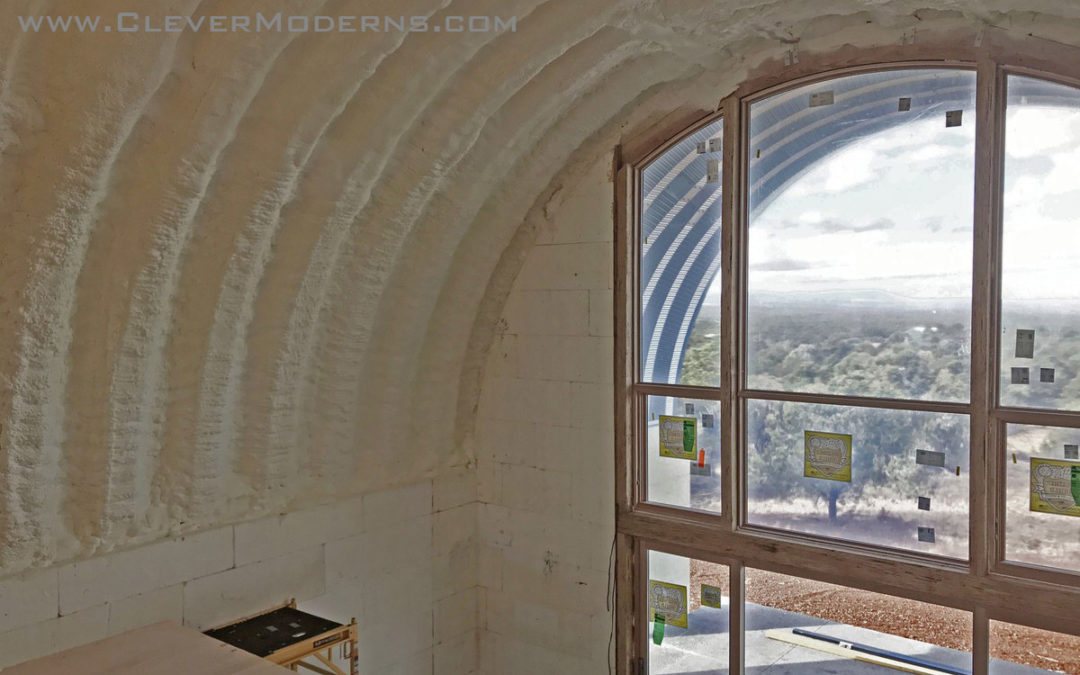 I wanted to post this separately from the HQ hut, because the Loft House is a little bit of a different animal in some ways, versus the Headquarters Hut. For the writeup of the HQ Hut insulation, with pictures, see this post.

The Loft House is finally insulated! Read on to learn about our steps to prep the building for insulating, how the spraying went, and our next steps. TLDR: We had 2″ of closed cell sprayed, and plan to have 3 more inches sprayed later on. Cost of this 2″ insulation layer was about $4K. For more stats and details, you can skip to the end. Enjoy!

One thing that’s unique about the Quonset Loft House at the Quompound is that the base and end walls are all built out of ICF — a system of foam blocks with concrete poured into the middle (Insulated Concrete Form). You can get a detailed rundown of how that all went together in this post.

Below you can see how the ICF looked after the concrete was poured, before we built the Quonset hut on top.

When they cut the curved arch shape into the foam to build up the end walls, we had them allow for a 3″-4″ gap at the top, to allow us to build the Quonset hut arches over top of the ICF. Now that it was time to finally have the metal Quonset hut shell spray-foamed, we had to close up the end wall gaps.

We settled on a system of cutting pieces of OSB to the curve of the arch, wrapping Tyvek house wrap over them, screwing them on, and sealing it up with caulking between the house wrap and Quonset hut arch panels.

Another pre-insulation task, similar to what we had done on the Headquarters Hut, was paint the base plates with Red Gard waterproofing membrane. In the photo below, of the base plate sitting on top of the ICF wall, you can see some dirt in the base plate that has been brought in by water seeping in. You can also see light coming in at the bottom of the diagonal vertical leg.

The manufacturers all tell you to caulk along the outside of the base plate, and you shouldn’t see light through there if you’ve caulked it. Still, any architect or home builder who knows what they’re talking about will tell you that caulking alone is not a permanent solution to a waterproofing issue. The Red Gard worked great on the HQ Hut, and we did it on the Loft House base plates as well.

We weren’t quite as sentimental about the metal ceiling of the Loft House getting covered up, as we had been about the Headquarters Hut ceiling.

Foaming in the Loft House Roof

When the crew showed up, they took the first day and a half to set up their rig and get the HQ Hut foamed in. Then they moved over to the Loft House. By the end of that second day they were about 2/3 of the way done with the house.

They got a good seal where the gap had been at the top of the wall.

One thing we learned: the closed cell foam goes on more evenly when they can spray it from farther away. Look how smooth it appears below, where it was easier to spray it from a distance. In a future post, I want to explore this and some other things we learned about how spray foam works.

Next steps: We will be roughing in the plumbing and electrical, as well as framing the interior ceiling similarly to the way we did it in the HQ Hut (see this post.) Once the ceiling is framed, we will add another 3″ of closed cell foam between the joists and then our plywood ceiling.