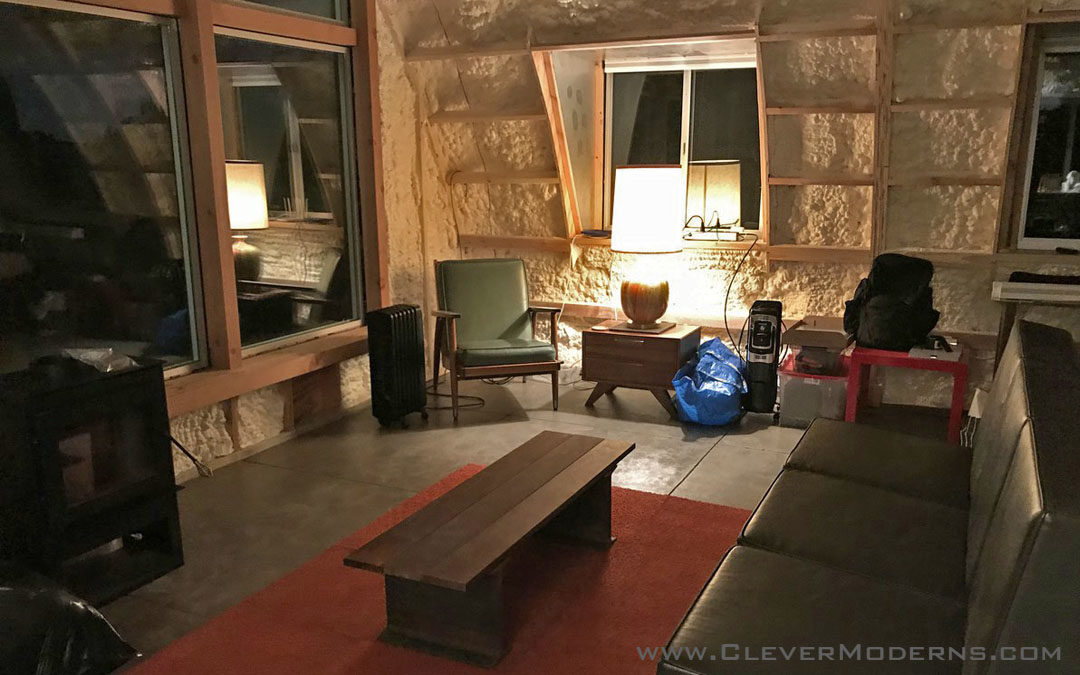 This post contains affiliate links, meaning I get a commission (at no additional cost to you) if you decide to make a purchase through my links. I only share affiliate links for things that: a) we have actually used (or comparable items if the original item is no longer available), b) that I would use again, and c) that I think would benefit your build. See my disclosure for more info.

After all the framing prep we had done, there were just a few things left to do to get the Headquarters Hut ready to insulate.

One thing we almost forgot to do was take down the lights! I got a last minute picture before we started this almost-last-task, and I’m glad I got this photo of how beautiful the metal shell was. We knew we were going to miss the beautiful metal interior, but honestly the hut was so freaking hot in summer and freezing cold in winter it wasn’t an option to leave it uninsulated any longer.

Another thing we decided to do was paint Red Gard in the base plates for an extra layer of waterproofing protection. Red Gard is commonly used as a waterproofing membrane behind bathroom tile. It ended up working really well – we had previously had water leak into the base plates, in spite of the fact that we had caulked per SteelMaster’s instructions.

We were lucky enough to have some rainy weather move through after the base plates got Red Gard-ed but before insulation day. We were thrilled with how well it worked! No more water in the base plates. So I highly recommend slapping some Red Gard on your base plates. One gallon was more than enough to do two coats on both the HQ Hut and Loft House, so even though it’s nearly $50 a gallon, the gallon went quite a long way.

The company we ended up working with came all the way from Phoenix! They showed up at around 10:30 or 11:00 on a Monday; the whole job of spraying 3″ in the HQ Hut and 2″ in the Loft House took them almost 3 days. (I’m going to write up the Loft House in a separate post.) They arrived in a single big box truck that had all the spray equipment and everything, powered by a built-in diesel generator.

We walked through both buildings to give them a sense of the overall scope, and then they started in covering everything in plastic that needed to be protected. Then they got busy spraying!

By the end of the first day they were done except inside the bathroom. I inspected a little bit after they quit on that first day, and I found a few places where the foam was obviously too thin. I pointed those out and they went over them again on Day 2, to my satisfaction.

Overall, they did a good job and we are thrilled. There were definitely some lessons learned and I will probably write more extensively on this topic, for a couple of reasons. One is that this is easily one of the most common Quonset-hut-related subjects that I get asked about. The other is just that I want to have a good record for myself, to look back at in the future.

That’s one of the reasons I like keeping this blog updated – it’s great to be able to go back and look at what we did! We’re at the point we’ve been doing this for three years. It’s fun to go back through older posts but it’s also super useful. Take lots of pictures, people! Take more pictures than you think you’ll need. You’ll be glad you did.