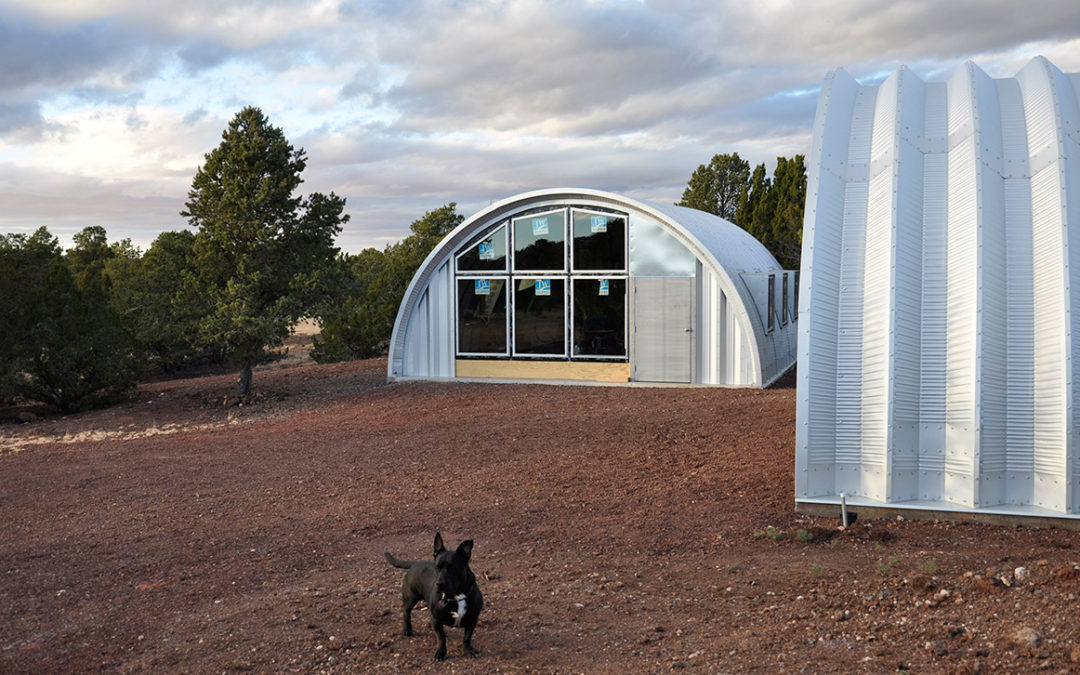 We’re back from another productive, though short, visit to the property. No major setbacks, no big delays, no smashed windows. Our first little Quonset hut house is coming along! The primary goal for this trip was to get the last three trapezoid windows installed, along with the panel above the door to the Headquarters building. I’m happy to report that we accomplished our mission and that building is finally closed up, which feels great!

Also, we decided that the Headquarters was enclosed enough that we could bring Daisy along.

So, she got her second visit to the Red Planet, which is what I’m pretty sure she calls it in her little doggy-brain. Her first trip to the property, in the early part of last summer, she really seemed to hate it. She disliked walking on the cinder driveway, and seemed dismayed that there weren’t any paved sidewalks anywhere. It didn’t help that it was miserably hot that week. At one point she refused to come with me on a walk around the property, and just stood on the driveway looking up at me stubbornly. “Why have you brought me to the Red Planet to die?!?!” she seemed to be thinking. Happily, in stark contrast, this time she did great! She was a real trooper.

Here was the scene when we arrived:

As I mentioned, this was a slightly shorter trip for us, driving over on Friday and returning to L.A. on Tuesday. Our typical routine has been to drive over on Thursdays, but we had tickets to hear the Moscow State Symphony on Thursday night. They did not disappoint! The program included Rachmaninoff’s The Rock, Tchaikovsky’s Piano Concerto #1, and Scriabin’s Symphony #2. The concerto was the highlight of the evening for us. It somehow seemed far more epic in person than it ever does in a recording, which is saying a lot since it’s a massive piece. (L.A. Times’ review of the evening can be found here.) But I digress…

It was very windy on Saturday, which made us nervous about installing the windows, given the minor disaster visited upon us last time it got really windy around our uninstalled windows. Once we picked up the windows from the Flagstaff Home Depot, we immediately got them inside where they would be safe. We worked out our staging and methodology for installing them, and got all the tools ready, and then shifted gears to work on some electrical rough-in stuff while we waited for the gusting winds to die down.

Besides the wind, we were also a little bit nervous about installing the trapezoids, out of fear that something about the sizes would be wrong, or simply that there would be some weird unforeseen complication with them. At some point the wind calmed enough that it seemed plausible to start in with the smallest window. Rather than work from a ladder, we backed up the truck very close, lowered the tail gate, and used it as a standing platform from which to work. This method worked well and we would do it that way again. With me on the truck bed and Eric inside on the ladder, that little trapezoidal window went right in perfectly on the first try. Easy peasy! (It almost seemed to verge on the miraculous, although I would like to hope it also involved some amount of skill and preparation on our part.)

So, as it turns out, installing trapezoid shaped windows isn’t all that different from installing regular rectangular windows.

The second and third windows went in relatively smoothly, too.

It’s probably hard to see from these pictures, but we decided that the third one we put in that day, the top window closest to the door, ended up sitting slightly crooked and needs to be adjusted. When we first noticed it, we decided to move on to some other tasks, and revisit it later to see if it still bothered us. Well, it did. The verdict the next day was that it needed to be re-set. So before we add the flashing and trim to the outside, we’ll remove all the screws, adjust the shims at the sill to straighten it, and then redo the screws.

With the windows all installed, we turned our attention to the panels above the entry doors on both buildings. We weren’t crazy about the way the above-door panels from SteelMaster were fit up and flashed, and took matters into our own hands. Our previous trip, I measured carefully, and when we returned to L.A. I had a local sheet metal shop fabricate flat panels to cover the openings above the doors. Since the doors and their frames are all relatively flat (compared to the SteelMaster panels with their deep V-groove), we decided to put a flat panel above each door, with the idea that we will paint each door and corresponding panel a solid color, creating an graphic vertical stripe on each building. We are as yet still undecided about what the color(s) will be, but we’re inclined at this point to make the two buildings different yet somehow related.

The panels installed fairly easily. There are a few things I would do differently if I were to do them again. These were 22 gauge and I would have them made of heavier gauge metal next time. Also, they clipped the corners at a diagonal in a way that I’m not crazy about, but when it’s all painted out you will hardly notice this. (It’s hard to explain and I don’t have any closeup photos of that detail, unfortunately.) But, they were only $140 for the two pieces, and the overall fit was very good. All in all we are pleased with them.

It’s sooooo nice to have the building enclosed! It’s been getting down into the low 30’s and even upper 20’s a bit at night, low 60’s by day, and windy. We’ve still been sleeping in the tent inside, but now it’s finally starting to feel more like a building and less like a construction project.

What color(s) do you think we should paint the doors and upper panels? Let me hear your great color ideas in the comments!