Quonset Hut Progress: Trenching for our Electrical and Plumbing 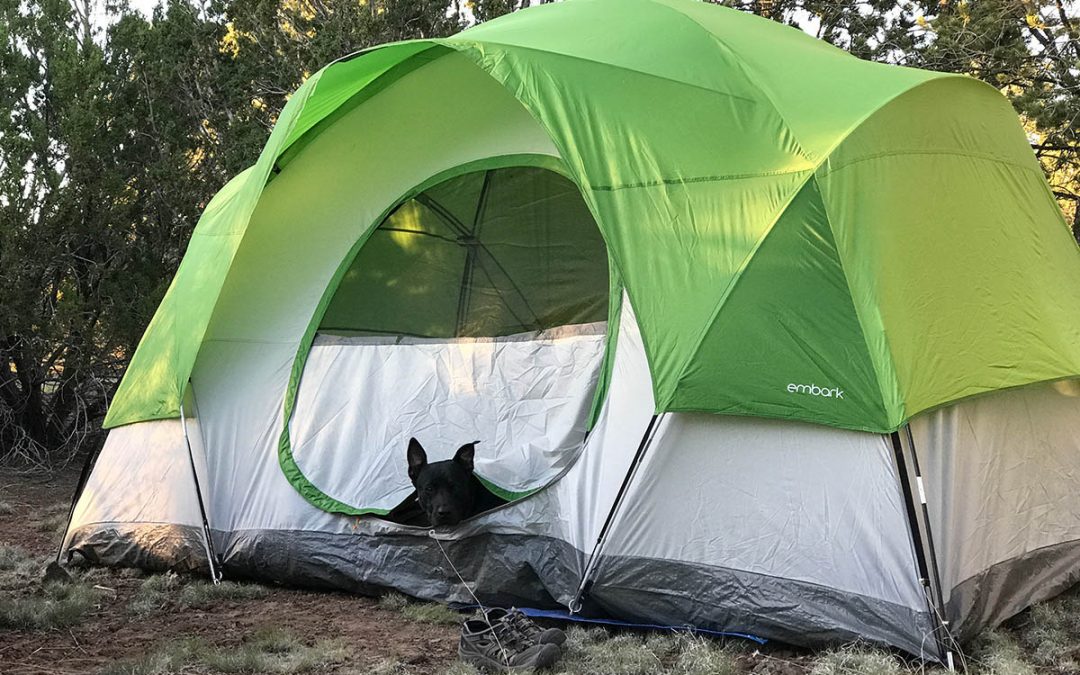 After our awesome success with QuonsetPalooza, we couldn’t wait to go back and keep the ball rolling! We got everything organized for our next big push, but ended up having a bit of a false start. The plan was for me to go over to Arizona about a week and a half after our return, by myself, to get a few things done that were one-person jobs. This would let Eric and Steven finish out the regular work week, and then the two of them were going to drive over on the weekend. Then all three of us would work all that following week, with possibly a fourth person joining in as well.

Our plan got off the ground reasonably well. I drove over on Tuesday, June 13th. My preliminary tasks, including getting a trench dug with help from some local experts and their big machines. This would let us connect the Headquarters Hut’s waste line to the septic system. 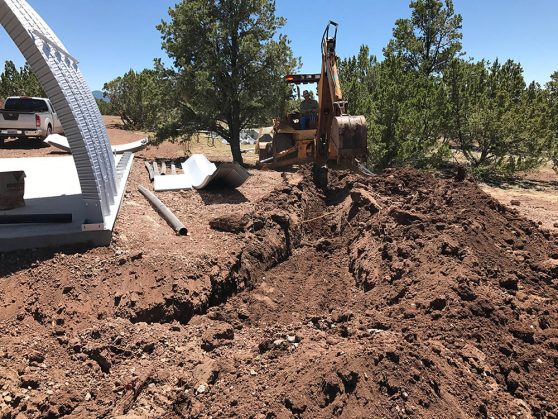 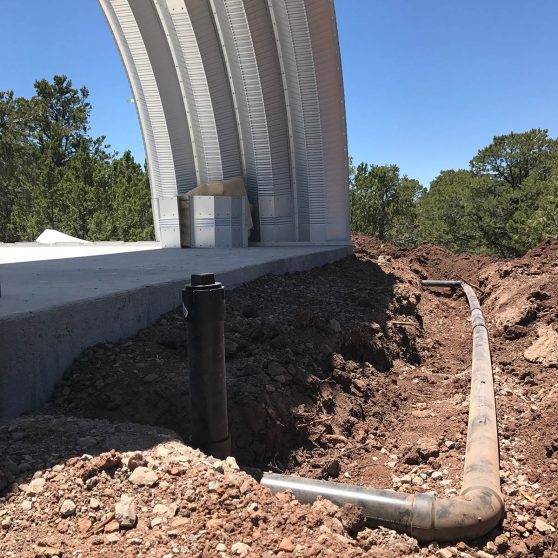 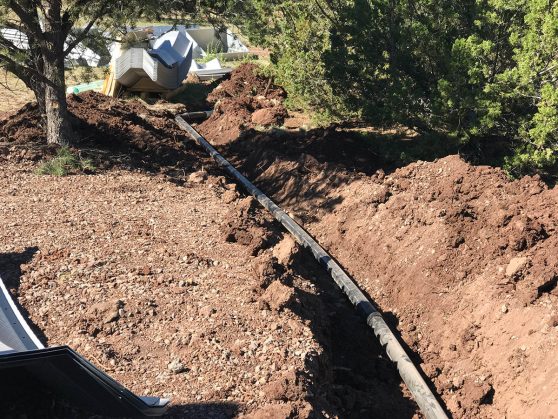 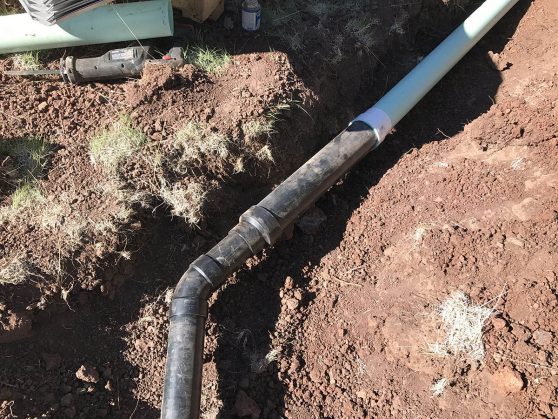 That last photo above shows the somewhat complicated connection where the black 3″ ABS waste line makes its final 22.5-degree bend, then transitions up in size to a 4″ version of itself, then connects via a special collar to the 4″ PVC line that was installed by the septic system installer. (Technically the type of PVC here is PVC SDR 35 which I merely make note of in case I need to remind myself at some point in the future.)

Over the few days that this played out, the temperature climbed into the upper 90’s. This was forecast, and thus not entirely unexpected. The unexpected part was the sheer brutality of the hot sun when you’re trying to work outside at an altitude of 6,700 feet. Then imagine that the work you are doing involves intimate handling of large bare metal parts that have also been in the hot sun all day. It gets pretty unpleasant pretty quick, if not downright dangerous. The forecast for the following week was for the heat wave to continue and even get worse. After a few days of this, with the weekend upon us, it seemed less and less realistic or reasonable to expect our friends to toil on our behalf under such extreme conditions. So, with regret, we cancelled their trip out, and decided that I would finish up a few more key things and head back.

Since we already had Kevin our excavator and his crew lined up for Monday to dig our Big Trench, we went ahead and kept him on the schedule, and I stayed over the weekend to work with him on Monday. The Big Trench was planned to run north-south from the electrical main panel at the north end, past both buildings, ending at the cistern on the south end. This would allow us to run electrical conduit from the main panel to both buildings, to run water from the cistern up to the bathroom in the Headquarters, and to connect electricity to the pump in the cistern. The skies were very dark those nights, and before everything got all torn up with the trench digging, I spent a magical evening photographing the semi-completed building shells gleaming under the milky way. I already blogged separately about those images, here.

Monday rolled around and the crew got the Big Trench dug without any trouble. 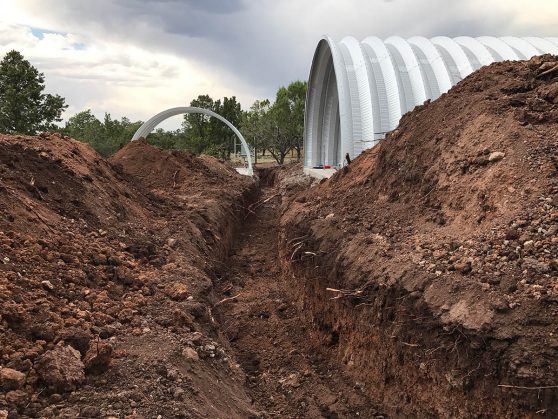 I managed to get a few other things done that trip, but the other big event worth recounting here was that it was Daisy’s first trip to the Quompound! It was not her first road trip, but it was definitely her longest car ride ever. She did pretty well as copilot in my pickup truck with me on the way over. When we got there, she sniffed around a bit and explored the buildings. 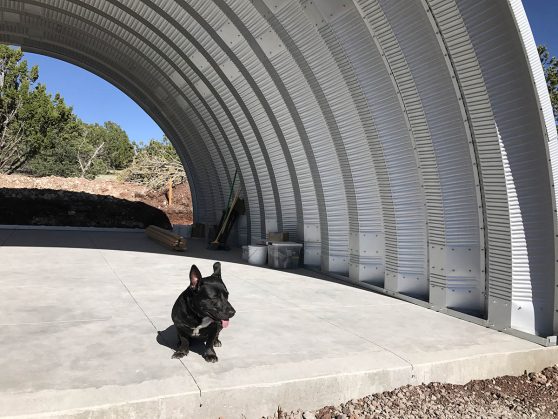 Pretty quickly though, it became clear that she didn’t like it and wanted to go home. All she wanted to do was hang out in the truck. Poor thing. 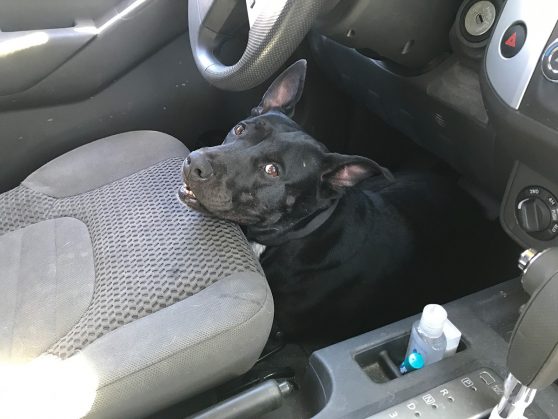 Once I got our tent set up she liked it in there. At home she’s really more of an indoor dog, and she definitely liked the enclosed space of the tent. 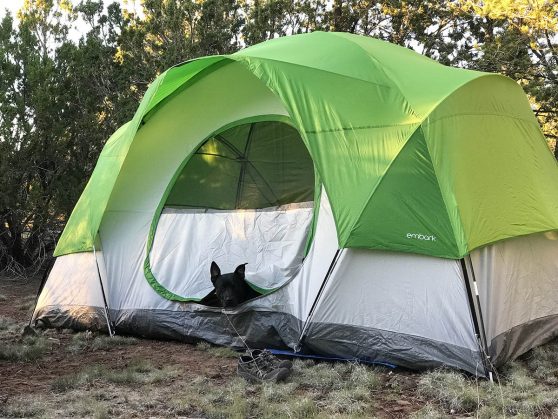 Eventually though, with the crazy heat and little relief from it at the property, I ended up boarding her at the Grand Canyon Pet Resort nearby in Williams. Tuesday morning I picked her up and we headed home. Part of me wanted to stay longer, but a week in the crazy heat was enough. We had originally hoped to get both buildings completed, at least the arches, and possibly some work on the end walls. When I left, it was just piles of dirt everywhere and open trenches. The trenches represented important progress though. Underground plumbing and electrical lines to the buildings aren’t pretty and photogenic, but they’re critical “under the hood” infrastructure.