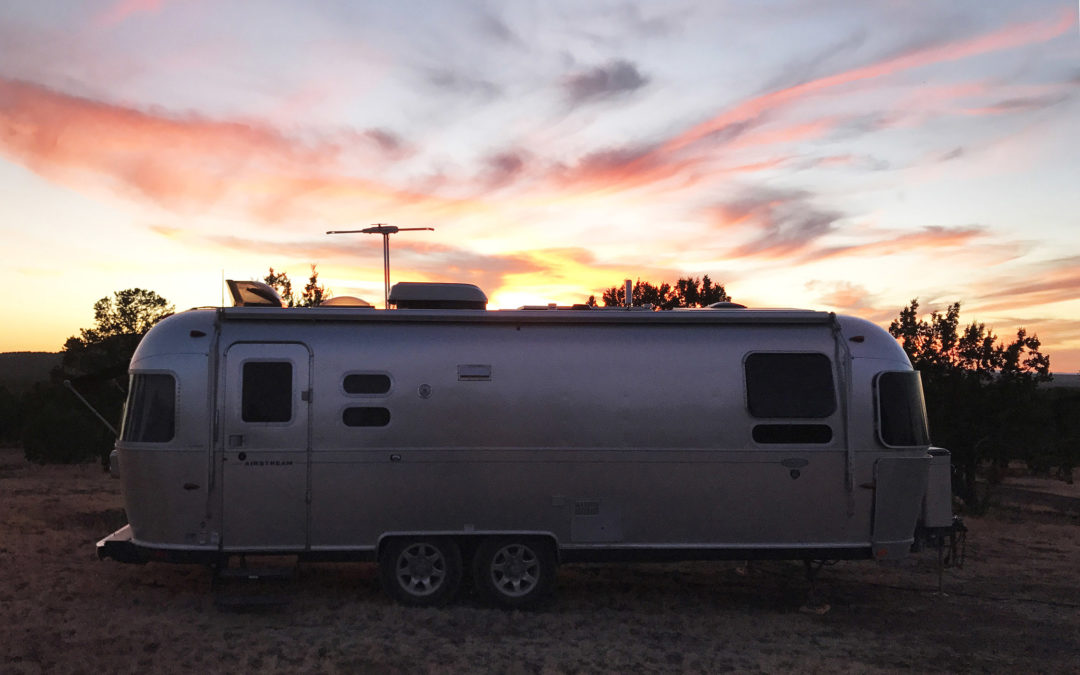 We had a great mid-October construction trip to the Quompound, complete with our friends Leigh and Brian stopping by in their Airstream trailer. If there’s anything that rivals a Quonset hut for curvaceous sheet metal grooviness, it could only be an Airstream. Ready for an update? Read on!

Here’s how the Headquarters building looked the evening of our arrival. We moved the tent over from the Workshop building since this building is now more enclosed and it’s been getting pretty chilly at night. 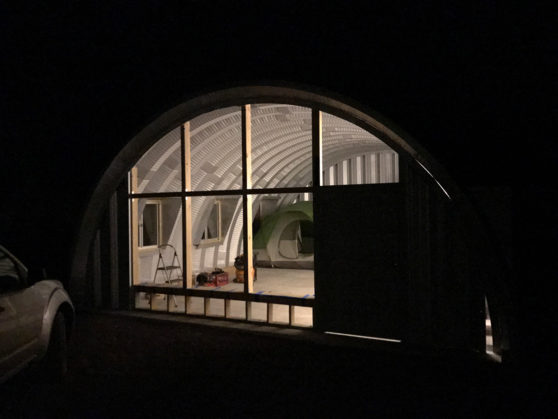 Our first big task was to get the upper trapezoid window headers cut and installed. Cutting the angles was definitely a challenge. We got a new oversized DeWalt compound miter saw that I have to say is pretty dreamy. It almost made the cuts easy. Almost. 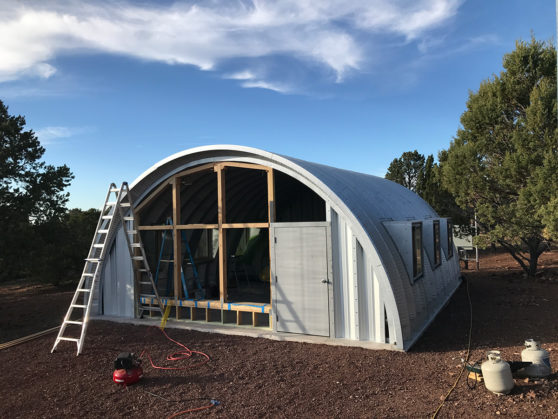 We clamped some blocks up to hold them in place, and nailed surface mounted sheet metal straps on the inside and outside. 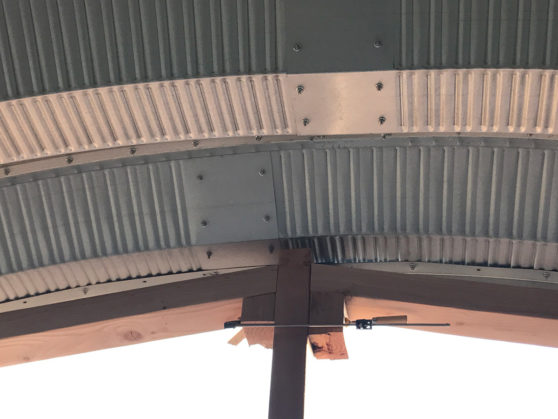 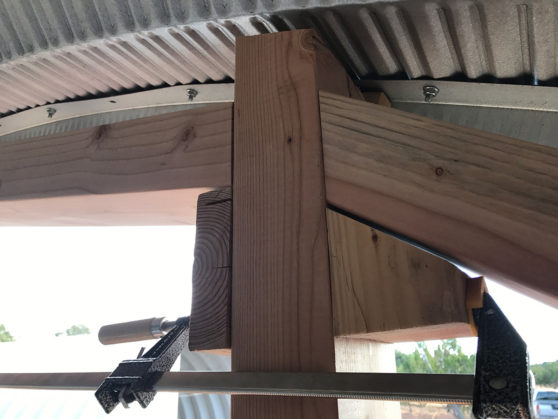 We also bent some Simpson metal angle brackets to the correct angle and added those underneath. After that came the plywood sheathing. Cutting the curve on the top edge of the plywood pieces was more tedious than difficult, in my estimation. Overall, I would say the plywood was less tricky but took longer than the header angle cuts. 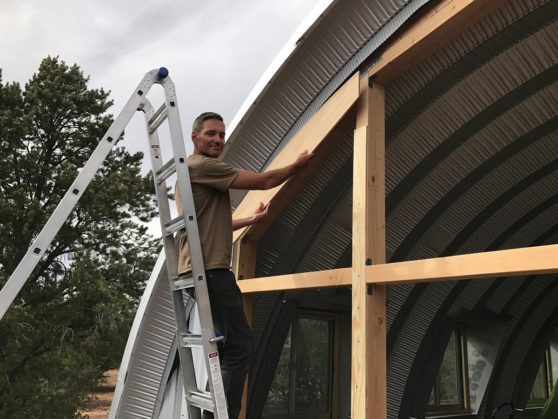 Once we had the plywood under control we went to Flagstaff and picked up the windows at Home Depot. They were very heavy and hard to move, and we leaned them against the building to await their installation.  They seemed reasonably out of the way and safely off to the side where we put them. The rest of the day was spent working on flashing the openings and prepping for the windows to be installed. 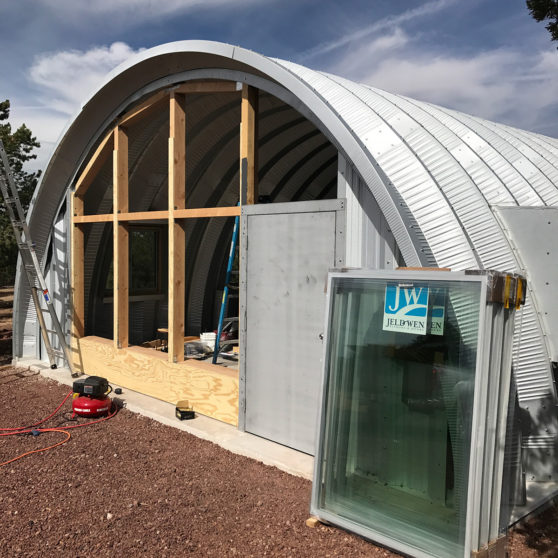 We started the next day installing electrical outlets and lighting in the workshop, planning to tackle the windows after lunch. It was pretty cold and windy, and we wanted to work on the upper window flashing before the lower windows were in place. Because of the cold, we decided the flashing would go better after it warmed up a bit, hence the electrical work to start the day.

As the morning wore on, the wind really picked up outside, with intermittent strong gusts on top of a relatively steady strong breeze. It turned out that Eric and I were both thinking the same thing at about the same time – that we should probably stop to check on and/or move the windows. Suddenly we heard the crash. We ran outside and our hearts sank. The outermost window in the stack had been blown to the ground and smashed. Somehow the the remaining two were spared. We quickly moved those two to safety before I stopped to snap a picture. 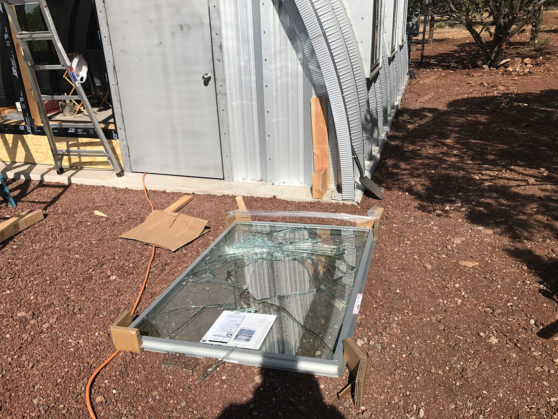 As we cleaned up the mess of broken glass, we realized that the outermost pane of glass hadn’t broken. What’s really crazy is that after we got the broken window moved out of the way and the glass cleaned up, the wind got still worse. It blew our 8′ fiberglass step ladder over, and then suddenly an even bigger gust threw our tall heavy aluminum step ladder right at the corner of the building where the three windows had just been sitting!!! So if we hadn’t lost one window, we might well have lost all three. Big lesson learned! Keep your uninstalled windows inside!

Even though the upper windows weren’t in stock yet, one of our big goals was to get the building closed up on this trip. Thus, we decided to go ahead and install the semi-broken window. We contacted a glass company in Flagstaff about possibly replacing the glass, and we also called the Home Depot door & window desk about a whole new replacement. It will be disappointing and expensive to have to order a whole new window, but it looks like the glass company can’t guarantee that the color of the glass will match perfectly. As of this writing it seems like we will probably end up replacing the whole thing. 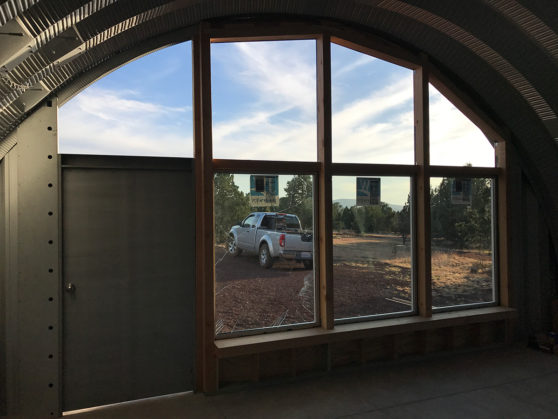 So, although the broken window was a disappointment, we were and are hugely excited and pleased with how it all looks! 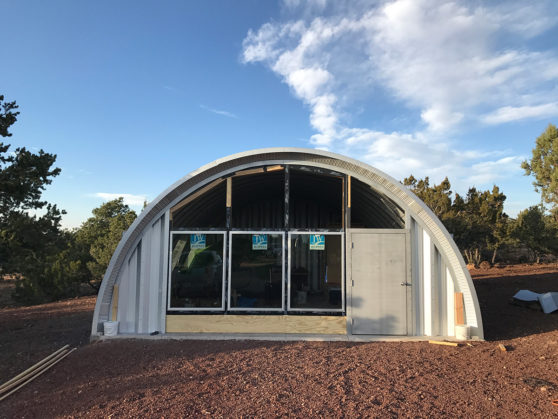 In other news from this trip, we now have an Internet connection! This was in the works for the past several weeks, but we didn’t expect it to happen this fast. Recently a local internet provider installed a new tower on the hill near us, and we were on their contact list for when it was going to be up and running. We thought it would be later this winter or possibly spring. During this trip, I got an unexpected phone call from them that their installer was in our area, so we scheduled it. He looked everything over and we determined that the best place for direct line of sight to the tower was behind the Headquarters building. They were reluctant to attach their antenna to the Quonset hut shell, and we didn’t particularly want to see it attached to the Quonset hut either. We went to Flagstaff and got a 10′ length of 2 1/2″ rigid conduit to extend one of the poles supporting our main electrical panel. Extending it on up was a pretty simple matter. The guy came back a couple days later, installed the antenna, and hooked us up! 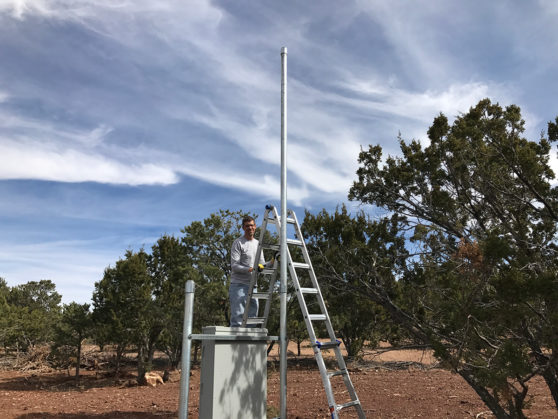 We’re a little nervous about lightning. I’m going to discuss it with our electrician to get his opinion on whether we’re already grounded adequately to protect from a lightning strike, or if he suggests either adding a lightning rod or even moving the antenna to its own pole. I’ll keep you posted on what we decide. 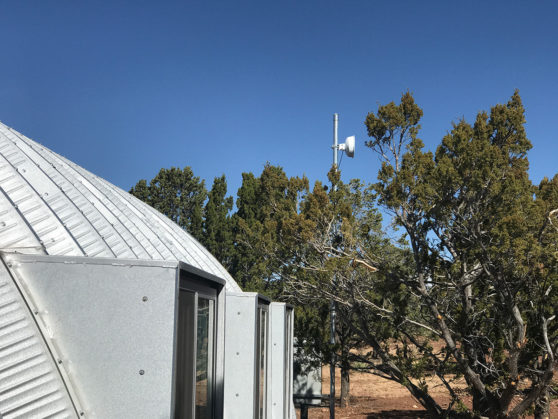 We had a couple really glorious sunsets on this trip. I’d be remiss if I didn’t share some of the Arizona beauty here. Pointy Peaks (aka Mt. Floyd) always looks fabulous when we have a nice sunset. This will be the view from the Guest House, which we’re starting construction on in the spring. 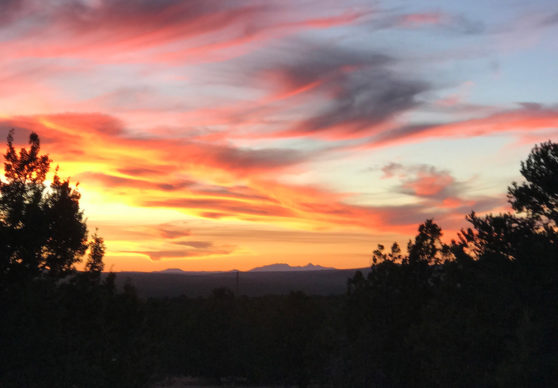 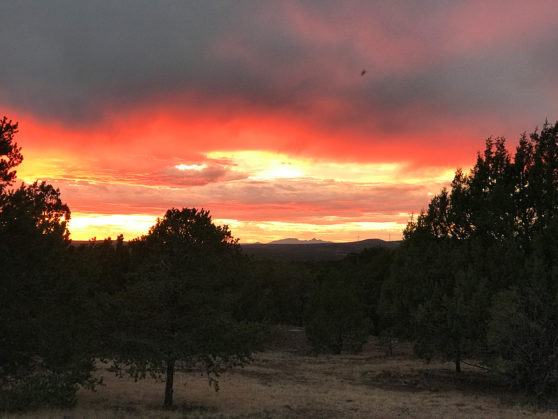 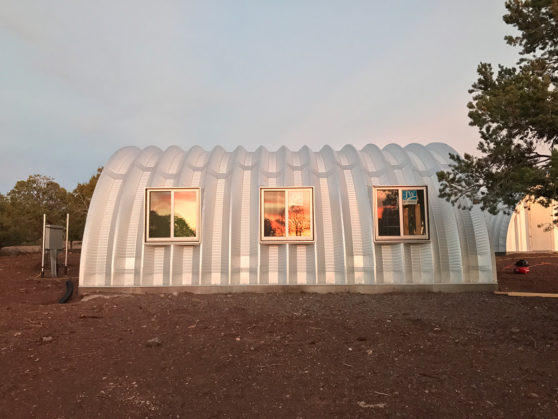 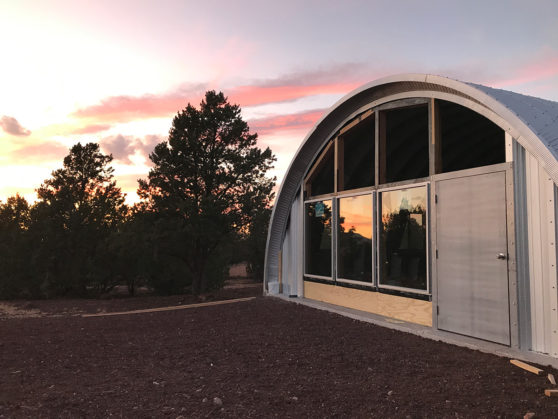 Last but far from least, our good friends Leigh and Brian stopped by and stayed all week with us, in their Airstream. They’ve been living the full-time Airstream lifestyle for over ten years, long before the itinerant van lifestyle thing became a craze. You can read about their adventures over at their blog, www.aluminarium.com.

Thanks again for visiting, it was great having you! Come back any time! 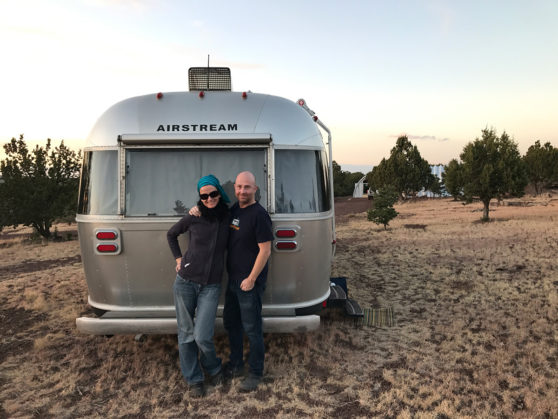 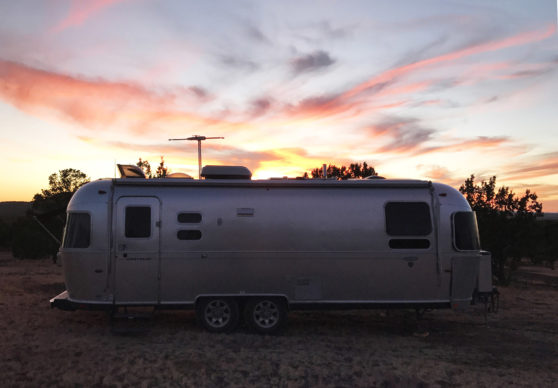