I’m back from my second visit to the property, which was my first (finally!) since we closed on the purchase at the end of October. Between us being sick, or snow/ice/rain in Arizona, or our other work & life schedules, we’ve repeatedly had to put off making the trip. It was a bummer that Eric couldn’t come and I was solo, but I had an amazing time, and got a lot done. The drive over from L.A. was relatively uneventful, apart from the amazing beauty of driving across the Mojave Desert, which I love and never tire of.

I was greeted at the entrance to the property by a scurry of brown and gray fur taking cover under the scrubby pines. I got out of the truck and managed to snap a photo of two jackrabbits. They were big! At least they seemed big to me. 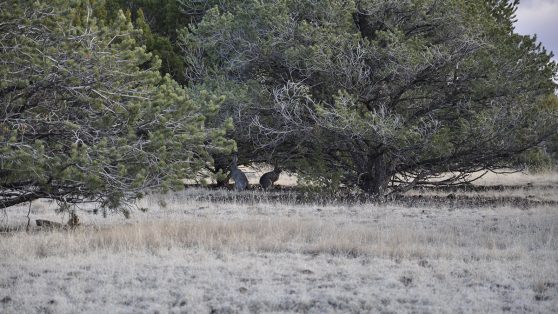 As I drove into the property, I got the answer to the big question that has been looming over us since last fall: The White Van Mystery! The van was gone! We’ll probably never know what happened to it, and that’s fine with us. Either the seller came back for it (from our understanding he did not live in the area) or gave it away. Or something like that. We’re just glad not to have to deal with it. 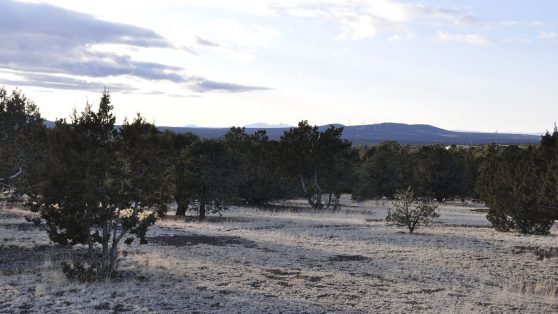 I walked the perimeter of the property, starting along the north. Our northerly property line has a shared easement with our neighbors, and there is an electrical transformer on that easement that we are going to need to hook up to for our power. It’s a little bit unclear how that is going to work, logistically speaking, since there is only one fence at what appears to be the property line, and the transformer is on their side of the fence. My understanding from the survey is that the easement straddles the property line. There doesn’t appear to be anyone living on that property, but there is a large metal storage-type building there. One of the things on our list is to track down our neighbors, reach out to them, and initiate a friendly conversation about these things. I believe we can find out who they are from the County Assessor. 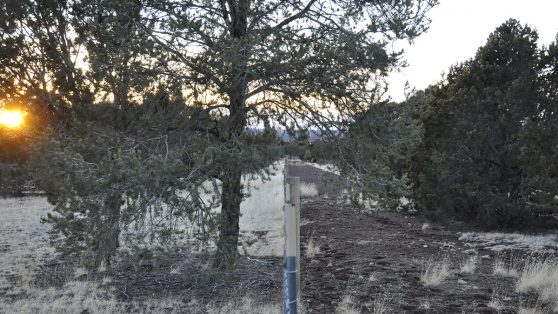 Looking down the fence line, with our neighboring property to the north (north being to the right.) 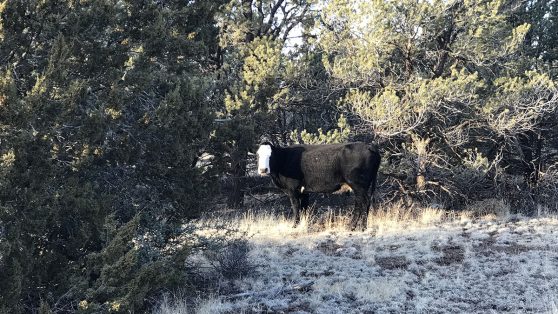 There was a cow on the northerly neighbor’s property.

Apart from a cow to the north, I didn’t see anything particularly remarkable as I walked the property. There was some mud from all the recent snow melt and rain, but the ground is mostly ground up rocky cinders, and seems to drain well in general. The only other wildlife I encountered was a bunny that bolted across my path as I walked. It was definitely smaller than the jackrabbits, and all I saw was a flash of the white cotton tail, then it was gone.

The thing I really wanted to see was the sunset. There were a few clouds drifting through, but it was mostly clear, and the sunset was beautiful. 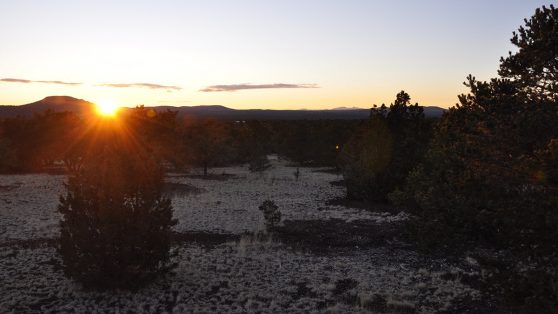 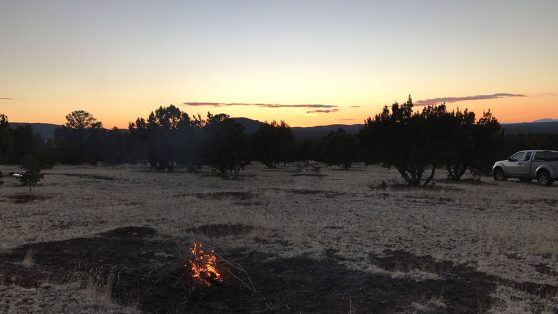 We have a ton of dead brush on the property, and it was relatively easy to whip up a little fire. I got it going as dusk set in and the stars came out. I took out my DSLR and got some pretty nice night sky photos. I was surprised how well they turned out, and I want to give them their own post, so stay tuned for that. All of this took place on Tuesday.

Next morning I got up, got a little breakfast, and headed back out to the site. I stayed in a motel in Williams – I’m not quite rugged enough to camp out in below freezing temps, and it was down in the 20s overnight. I had two appointments on the property Wednesday. In the late morning, I met with APS – Arizona Public Service, the power company. They looked at the transformer in the easement with me, and we discussed our plans for the garage/workshop, guest house, and main house. They were very helpful, and it seems like we are going to be able to do everything we want to do, as far as they’re concerned.

The other meeting was with a couple of local pros about getting our septic system permit. We walked the property and determined where the best placement for the septic system would be, based on where we wanted to put the buildings. We staked the spots where they will come back and dig. After that, the County will send an inspector, who will so a “perc test” to determine the suitability of the soil conditions. Apparently they can be fairly picky about this, and we’re a little nervous. Ideally, we will be able to install a conventional septic system, which should cost somewhere around $6,000 – $8,000.00. If there are adverse soil conditions, or too much solid rock, and we fail the perc test, we might have to install what they call an “alternative” system, which can cost as much as $20K. It will be sometime this coming week at the soonest before they can come back and dig, depending on how much snow gets dumped on the area over the next few days, and how quickly it melts off again. The possibility of underlying rock interfering with the perc test has us nervous, because one of the things I fell in love with about this property is the presence of some beautiful, rugged lava rock outcroppings. They appear to be confined to certain areas of the site, and aren’t particularly widespread, but it’s hard to tell what’s underneath the soil until they dig and take a look. 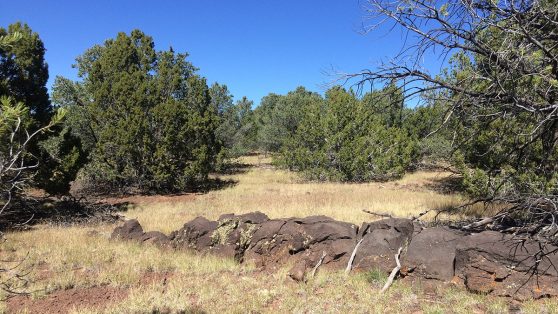 One of the lava rock formations on our property.

When we were scouting the area for the septic system, one of the guys pointed out a burrow under one of the trees and said it was probably javelinas. Maybe we’ll run into them one of these days out there. 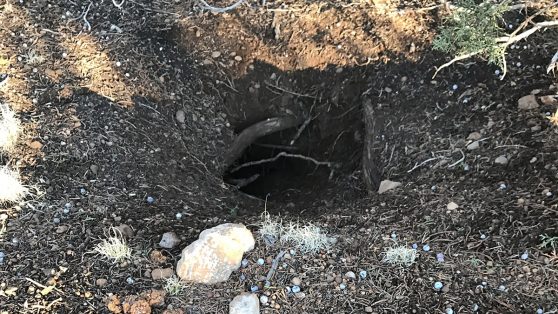 The javelina burrow we saw.

Last note on the wildlife front: there was a particularly interesting bird hanging around on Saturday, when I was working on some site reconnaissance in between meetings. I only got a distant photo of it, but with that distinctive black collar it was enough for my friend Deanna, who is an avid birder, to ID it as a northern flicker, a type of woodpecker. I remembered it having a distinctive call, and she pointed me to this YouTube video of it. Yep, that’s what I heard. Very cool bird. I’ll keep an eye out for them next time I’m there. 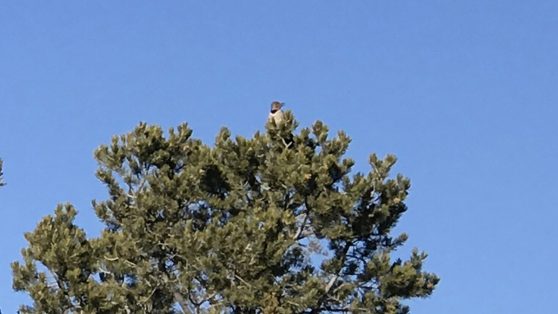 The northern flicker I saw.

Lastly, I’m happy to report that I was able to make a preliminary stab at laying out and staking the location of the guest house. I had hoped to get more stakes in the ground (garage/workshop, storage building, main house) and do more field measuring and surveying in detail on this trip, but between Eric not being able to make it, and the fact that there was a big winter storm blowing in on Thursday, I had to be satisfied with the progress I described above. 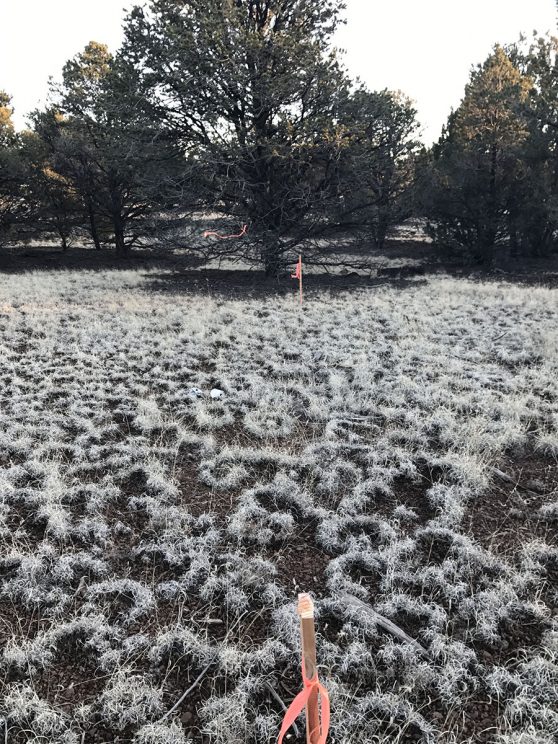 So: fingers crossed that they can excavate soon, that our soil “perc test” gets good results. Even though I couldn’t do any more measuring and staking, we definitely have a clearer picture of how we want the overall site plan to work. Thursday morning there was heavy snow in the air, and although it would have been fun to go back out to the property and see it in the snow, I did the prudent thing and headed for home as soon as I had some coffee in me.

Laugh with us. Cry with us. Gaze the Arizona night sky with us. Our monthly newsletter will bring all our construction adventures to your inbox: the challenges, anecdotes, wins, and lessons learned as we build our prototype Quonset Houses, and launch the Quompound as a Grand Canyon vacation rental destination. Unsubscribe any time if it’s not for you.