When we were searching for our dream property, we ended up finding it by way of the parcel next door. For some reason that property was the one that came up in the listings our realtor sent us, and it was the reason I went down this dead-end cinder paved country road that day. When I got there, I noticed that both properties had for sale signs. The property to the south was unfenced, so  it was easy to walk onto it, and even drive on. Ours (that we ended up buying) was fenced off though, and for every “For Sale” sign, there was also a “Keep Out/Private Property” sign. Not knowing the area all that well, and not wanting to walk into the wrong end of a clearly fenced Private Property situation, I asked our agent (shout out to Nellie over at Banker’s Real Estate in Williams!) to find out if it was ok to walk on in. She called that seller’s agent for me, and reported back that it was fine; that the seller had fenced it and put up the signs to keep people from trespassing and camping on the property. It was basically a green light to go for it.

There wasn’t a proper gate, but there was a break in the fence with a chain across it, so I left my truck at the road, un-hooked the chain, and started exploring the property. As I got further into the 10 acres, I noticed something ahead in the trees. Some kind of white vehicle was parked there. Unauthorized campers? Squatters? Heisenberg? I opted to not go any closer and just quietly explore what I could see from closer to the road, and try to find out through the realtors if anyone knew what was up with the vehicle. 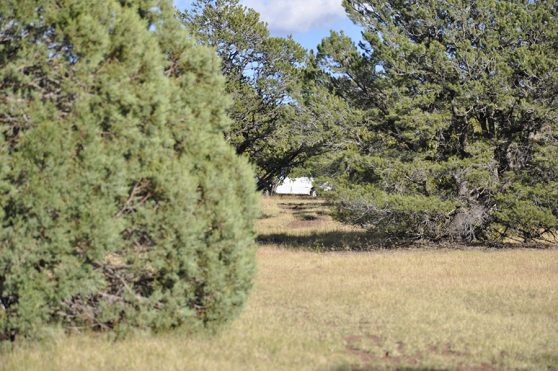 By this point it was getting towards evening, and I figured I wouldn’t be able to reach Nellie at the office. The next day, I knew she was out of the office all day, so in the morning I called the seller’s agent directly. She indeed knew about the vehicle, and it was nothing to worry about. She explained that it was the seller’s, that it wasn’t registered or titled, but he just used it to run around on the property. He didn’t care about keeping it, and was just going to let it convey to the buyers when the property sold. Whew. I went back and explored the whole property, and it was fine. There were no unauthorized campers, no squatters, and thankfully, no Heisenberg. Just a crappy white van with all the windows smashed out and the front bumper torn off. 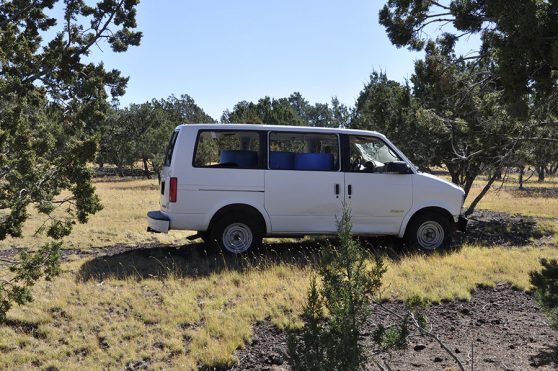 Lovely, isn’t it? Turns out it’s also immortalized in the Google Earth satellite imagery, too. 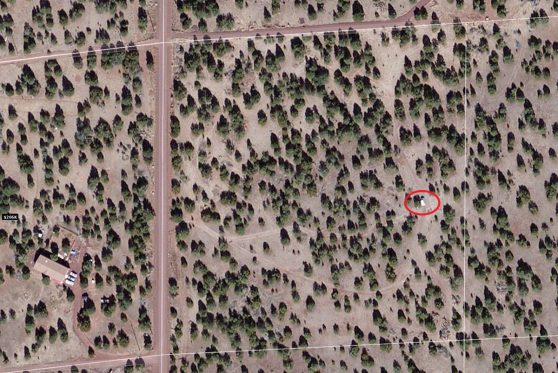 But the property overall was really lovely, and was priced a lot lower than the one to the south, which was practically identical, save for the abandoned white van thing. So we made our offer and negotiated a little and bought the place. Then I called the State of Arizona MVD to find out about the title transfer. Turns out, according to the State of Arizona, vehicle titles aren’t allowed to automatically convey with land. They’re considered separate property and have to be dealt with independently of the land they happen to be sitting on, abandoned or not.

After several calls to a few different local and state law enforcement agencies as well as the MVD, some of which included some really long hold times, we determined that we either needed the title or the VIN to be able to move things forward. Unless we could get a title or power of attorney for the vehicle signed over to us from the seller, we were going to have to go through a months-long abandoned vehicle process. (Unlike the junk yard Heisenberg used to dispose of his unwanted vehicles in Breaking Bad, the only one in the area we could find was unwilling to deal with a vehicle without a proper title.) We reached back out to the seller’s agent about the title. There was an expired license plate on the vehicle from 2010, so we figured there had to be a title somewhere. She would only robotically repeat that there was no title, that he just used it to “run around” on the property. We were starting to wonder if the thing was stolen or something, and what kinds of headaches were in store for us as we moved forward with sorting it all out. We needed that VIN. By now it was November, the holidays were approaching, and for us to drive back over from L.A. would have to wait until sometime in mid-December.

Around this time, my buddy Alex, who has a vacation house in the area, was going over from SoCal to check on his place, and was excited to see what we had bought. Perfect! He could get us the VIN and we could start the process with MVD. He called me from the property with a problem. He couldn’t find the van! He went back to the property a couple of times, walked it thoroughly, and couldn’t find any sign of the van.

Then the area was hit with snow and ice in December, right before Christmas, when we wanted to go. Plus we were both really sick with the flu over the Christmas-New Year’s week, and travel was out of the question.

So now we’re sitting here in L.A. wondering: What’s up with this white van? I’m trying to steer into a trip over there next week to meet with a guy who will help us get started with soil testing and permits for our new septic system, and the Mystery of the White Van is high on my list!

Laugh with us. Cry with us. Gaze the Arizona night sky with us. Our monthly newsletter will bring all our construction adventures to your inbox: the challenges, anecdotes, wins, and lessons learned as we build our prototype Quonset Houses, and launch the Quompound as a Grand Canyon vacation rental destination. Unsubscribe any time if it’s not for you.