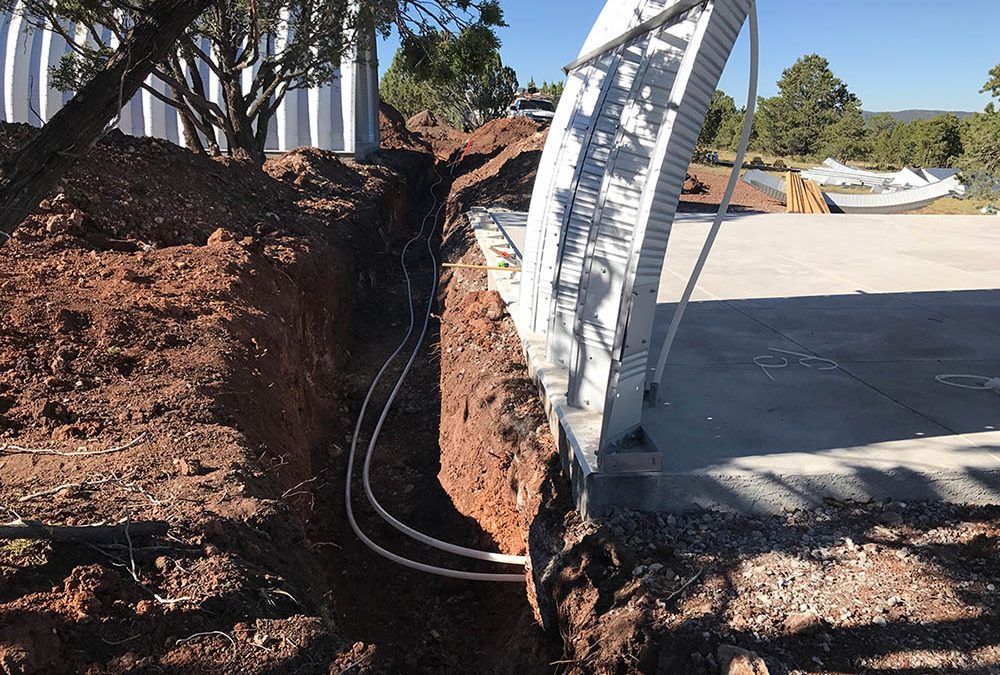 We’ve been trying to get back to the Quompound for our next big push to finish the building shells, but various schedule conflicts keep getting in the way. It looks like it will be later this month before we can get back there, but the good news is that some extra exciting stuff is in the works for that trip, so stay tuned!

This trip was quick and came up somewhat suddenly. With the trench dug and sitting open we had been trying to coordinate schedules with our plumber to hook up the cistern and run the water line to the building. We were anxious to get that work done and get all the trenches closed up. I got a text on Monday the 26th that it would be that week, so we threw it in gear and I wrapped up some work stuff to clear my schedule. Wednesday I drove out across the Mojave to our little slice of Arizona heaven. My tasks were to supervise the plumber and make sure he was getting the particulars the way we wanted them, and also to run the electrical conduits that share the trench with the water lines. It seems to sound weird to a lot of people when I tell them that we dug one trench for both electrical and plumbing lines. I don’t know if this varies much by jurisdiction, but the only requirement for them to share a trench was to keep them a foot apart.

Timing and schedule-wise, everything worked out great. I was able to run the electrical lines to our two buildings as well as two conduits that got laid in the trench for our future house and guest house. The plumber got everything put in, and we got a temporary hose bib in the building so that once we get our cistern filled, we will be able to get water out of it. I was even able to get it all inspected and approved before heading home on Friday!

Here are a few images of what we got done:

This is the back side of our big 400 amp electrical panel. The conduit to the left goes into the Headquarters; the smaller one to the right goes to the workshop. Those will both be 100 amp each. Of the two larger ones, the biggest one is a 3″ conduit to carry 200 amp service to the main house, and the smaller is a 2 1/2″ to carry 125 amp service to the guest house. Both of those two are just dead-ended and capped near the cistern at the other end of the trench. We will extend them on to their respective buildings later.

This view looks north along side Headquarters, towards the main panel which you can see behind the building there. Down in the trench, the two white water lines are visible to the left. One feeds water into the building from the cistern, and the other will continue the pressurized water line from this building out to the other two houses in the future. The future building water line it is stubbed out up by the cistern for future extension, like those two electrical lines.

This view looks south from about the same point as the view above, towards the workshop. The cistern is just on the other side of the workshop.

Here are the plumbers installing the pump and setting it up. The vertical pipe there is the electric conduit to power the pump.

There was a forest fire burning on the edge of the Kaibab/Coconino National Forests about 20 miles from our place, and at times you could smell it in the air. Other than that, there wasn’t much going on to report. It was a quick trip to get the stuff in the trench that needed to go in, so that on our next trip we can have all the trenches closed up. While they’re at it, we’ll have Kevin and his crew tidy up the grading and get rid of all the excess piles of dirt.

I’ll leave you with a beautiful Arizona sunset from this trip.